Yorkshire Terriers or “Yorkies” may look dainty, but in their hearts, they are true terriers – feisty, brave, and packed with personality. That’s probably why they are one of the most popular breeds in America, ranking 10th out of the 193 breeds recognized by the American Kennel Club.

These affectionate little dogs with the silky coats actually have a doppelganger in their lesser-known cousin, the Silky Terrier or “Silky”. Along with their similar appearances, these two members of the Toy Group have history in common, which might explain why these tiny Earthdogs are often confused for one another.

“Most Silky owners are thrilled when someone comes up and knows we are walking a Silky and not a Yorkie,” states Norma Baugh, breeder of Silkys for 40 years and past president of the Silky Terrier Club of America. 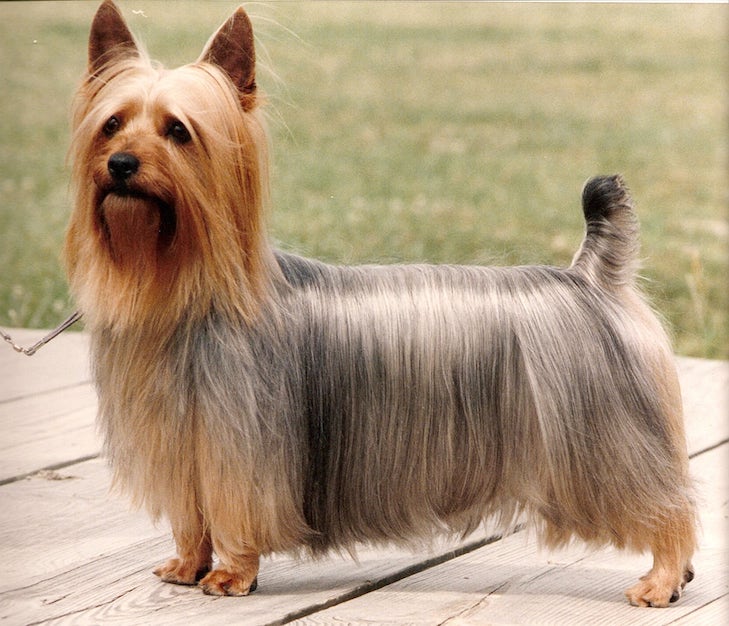 She says the club often receives calls from people asking if they have a Yorkie or a Silky. Many times, the dog in question is an oversize Yorkie, but unless you know the physical differences in head shape, the breeds can be hard to tell apart.

Robbe Lyon, vice president of The Yorkshire Terrier Club of America, agrees about the confusion, confirming that the breed question most asked by the public concerns Yorkies vs. Silkys. Lyon, who has been breeding and showing Yorkies with his wife Gloria for 44 years, believes the mix-up is understandable since the Yorkie was a prominent breed used in the development of the Silky. 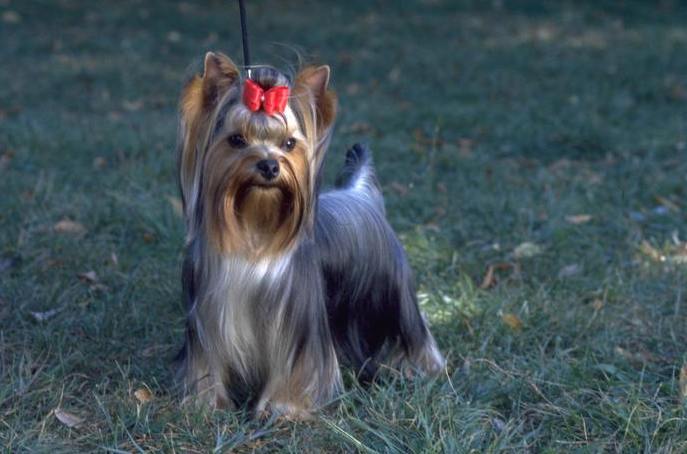 Lyon explains that the Yorkie was developed in the north of England in the 1800s. Several small, broken-haired British terriers went into the mix, such as the Paisley or Clydesdale. Although these breeds no longer exist, the combination resulted in the breeding of the founding father of today’s Yorkies, a dog named Huddersfield Ben, in 1865.

“The breed was originally a workingman’s dog,” says Lyon. “Some had duties as sod-house guardians and others earned their keep in saloons by entertaining clients and chasing rats. Later, the elegant little dog became fashionable with the upper class of Victorian society.”

It wasn’t until after Yorkies arrived in Australia that the Silky was born. Australians wanted a stouter dog for the home, so they looked to cross the Yorkie with the Australian Terrier. Baugh explains that it has become common to say Silkys are a cross of Yorkie and Australian Terrier in Australia. But, there is more to the story than that.

“As time went by, the Yorkie was bred in England to be a smaller, long-coated dog to catch mice,” she states. “The Australian Terrier became more developed in Australia to be stout, with medium bone and strong teeth to catch larger varmints. And they had the broken coat.”

However, due to the breed’s ancestry, puppies with long coats would pop up in Australian Terrier litters. According to Baugh, these long, silky coated pups were taken into several different areas of Australia and developed to be a sturdier-built long-coated dog with large teeth. The purpose of this new breed was to be both varmint killers and pretty household pets. Of course, crosses with Yorkies would have gone into the development of what was to become today’s Silky. 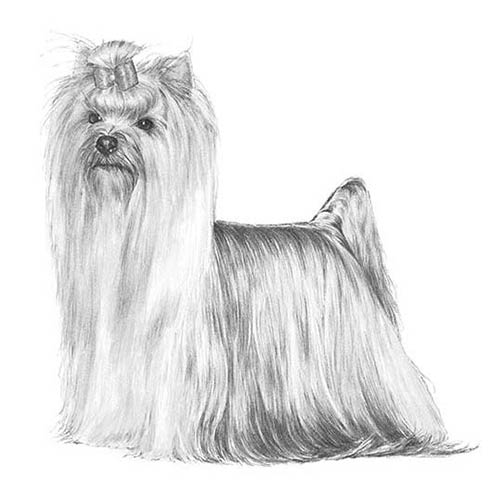 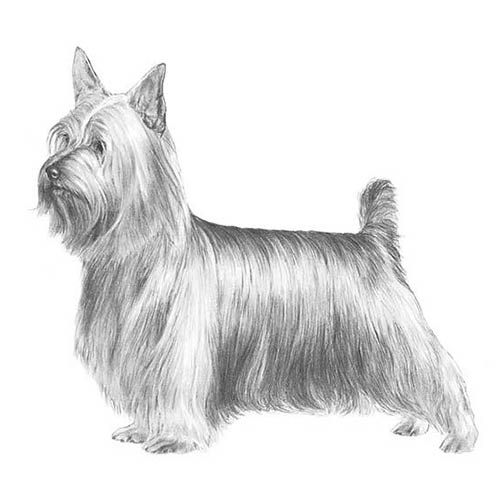 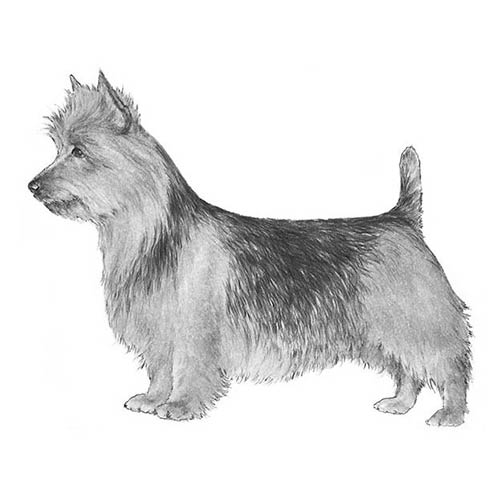 Both the Yorkie and Silky are blue- and tan-colored toy terriers. Baugh believes that the coat and colors are most often the source of mix-ups. Both have a straight, silky-feeling coat reminiscent of the texture of human hair. When their coats are trimmed as household pets, they can look very much alike.

However, when it comes to the conformation ring, the Yorkie’s coat is trimmed to reach the floor while the Silky’s body coat should not approach that length. And the hair on their head is different too, with the Silky’s being shorter.

“In the show ring, Yorkies often have a bow in a topknot, while the Silky is topped by profuse hair parted down the middle,” says Lyon.

To add to the confusion, the breeds are of similar size, as well. But, the body of a Silky is much more substantial, with more bone and muscle. They range from 10-11 pounds, while the Yorkie weighs no more than seven. According to Lyon, a smaller, highly-refined Silky and a larger, unrefined Yorkie may look nearly identical to the untrained eye.

Another key difference in appearance is found in each breed’s head. The Silky has a wedge-shaped head versus the more rounded skull of the Yorkie. Plus, the teeth are larger, originally intended for catching larger prey. In addition, the ears can help distinguish the Silky. According to Baugh, the shape of the ears is different than that of the Yorkie. Silky ears are not as large at the base and have sharper upside-down V-shapes set on the top of the head. 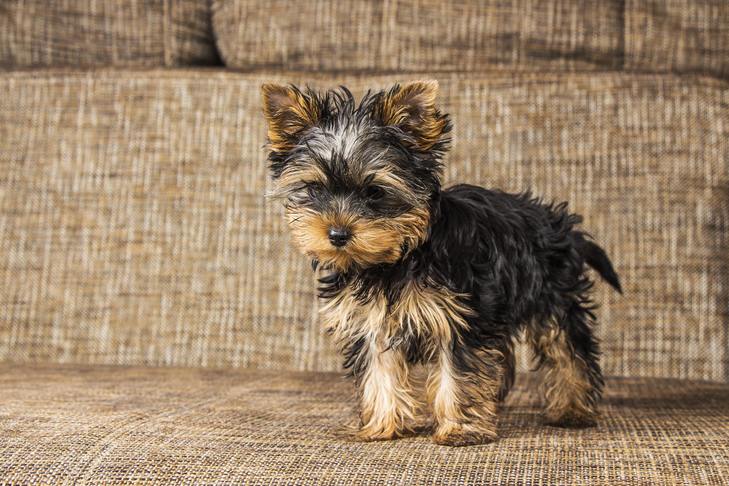 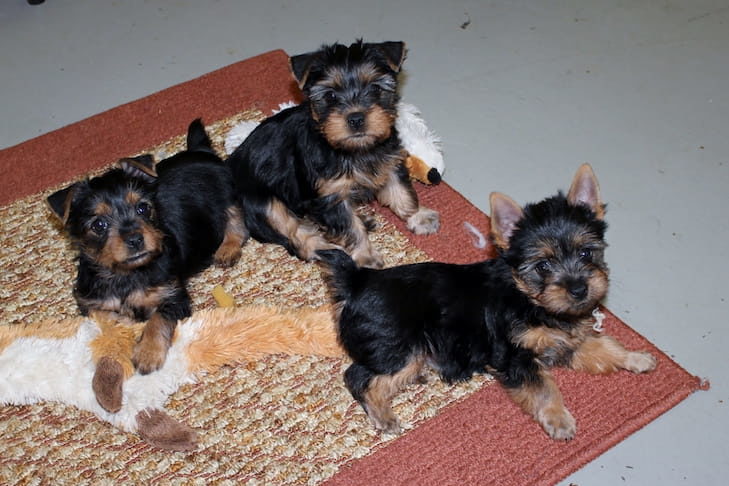 Both breeds may be in the Toy Group, but they are terriers through and through. Although each Yorkie has a unique personality, Lyon asserts the defining characteristic is being a perky companion or adorable charmer.

“As far as temperament, the Yorkie is a true terrier: intelligent, feisty, energetic, courageous, and independent (often stubborn),” claims Lyon. “They think they are much bigger than they are and will challenge much bigger dogs. Their spirited play and enduring energy are a constant source of entertainment for their owners. They are clever and will skillfully try to dominate any household.”

Although now retired from breeding and handling, Baugh’s years of experience have shown her that Silkys are loyal, fearless, and tenacious terriers at heart as well. She believes their definitive characteristic is being alert and on watch at all times.

“They can be sweet but protective,” Baugh affirms. “They will keep your yard free of gophers and your garage free of mice! At the same time, they want to sleep in bed with you and be with you every minute of the day. Although they’re very smart, like most true terriers, they can be a bit stubborn in the training department! They get bored with training unless you make it fun.”

7 Things We Bet You Didn’t Know About Yorkshire Terriers

Yorkshire Terrier : Funny and Cutest Yorkie says ” I love you all “

My Yorkie ate my earphones!!!